When it comes to choosing between QHD and WQHD for a projector, people often get confused because both the resolutions seem the same. Both these resolutions are considered as 1440p or 2K resolution, where the display resolution of QHD is 2560 X 1440 while the WQHD is referred to as 3440 X 1440.

So if you are planning to get yourself a 2K projector but are confused about whether you should go for QHD or WQHD to enjoy an immersive visual experience. You have landed at the right place, as today we will be discussing QHD and WQHD resolution along with their differences.

Popular Projector’s Resolution and Their Acronym 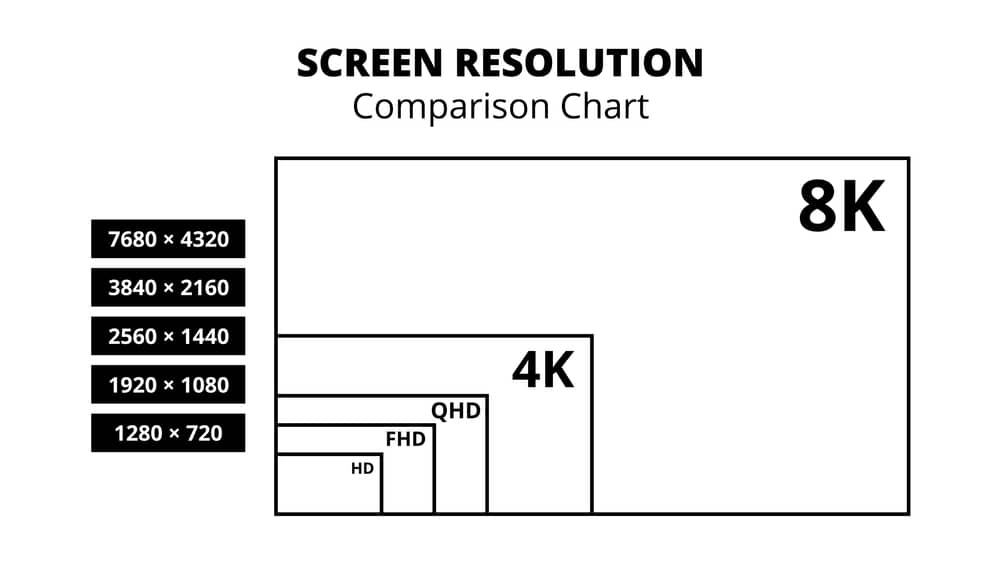 What is QHD Resolution?

QHD is a popular display resolution which refers to 1440p resolution. QHD is also known as Quad HD or Quad High Definition Resolution, but you will mostly see them referred to as 2K resolution in various projectors and displays. This resolution gives you an image measuring 2560 X 1440 in pixels which is half of the widely popular 4K resolution.

Full HD and 4K resolution were popular in the market, but FHD is getting quite common while 4K was very expensive. So users were looking for a middle ground, and that is how QHD came into existence. In the start, it got popular with computer monitors and gaming consoles, and gradually it was incorporated into projectors and TVs. Nowadays, many smartphone displays also come with QHD resolution.

What is WQHD Resolution?

WQHD resolution is similar to the QHD resolution but with a widescreen option. Like QHD, WQHD also belongs to the 1440 resolution category and has the same attributes. However, where it differs is the higher pixel count than QHD, and it is primarily a preferred widescreen view of 2K resolution. It offers an overall measure of 3440 X 1440 pixels, whereas QHD measures around 2560 X 1440 pixels.

So WQHD has 880 more pixels than QHD on the horizontal spectrum, which helps it to maintain an optimum pixel count at a widescreen view of 1440p. Although there are only a handful of projectors that come with a WQHD view, QHD resolution projectors are pretty high in number in the market. WQHD is primarily popular in widescreen computer monitors and perfectly suits aspect ratios like 16:9 and 16:10.

Pixel density generally refers to the total number of physical pixels present per inch area of the screen or display. The pixel density of a device is generally identified by pixels per inch or PPI, and the higher the number of PPI, the better will be the image quality. It is increasingly becoming an essential aspect in determining a device’s visual performance because the resolution of the screen is dramatically growing at a faster rate.

What Is The Difference Between QHD And WQHD Resolution?

QHD and WQHD might look the same as they fall under the umbrella of 1440p or 2K resolution, but there are some differences. Not only does WQHD has 880 more pixels than QHD resolution, but it also gets a natural widescreen format without needing to stretch the image. WQHD perfectly fits widescreen aspect ratios and doesn’t create a black bar on the side.

However, the overall attribute is almost the same, and WQHD is only created to make 1440p resolution suitable for widescreen format devices. Both the resolutions share the same pros and cons and have almost the same image quality on the big screen. Importantly they share the same vertical pixel measure and perfectly serve people who need better image quality than full HD but not by shelling a considerable amount for 4K.

Both the resolution is preferred by many people, but the WQHD is more preferred by gamers. Lastly, both QHD and WQHD have the same 108 PPI pixel density, so the vibrancy of the images is also the same.

Do The Extra Pixels Count?

As we know, WQHD has 880 more pixels than QHD but does that extra pixels count when it comes to overall visual performance and experience. If you want a widescreen experience and don’t want the image to be stretched, WQHD resolution serves as the ideal choice. With regular devices and displays, both QHD and WQHD won’t make any difference, and overall the image quality will look the same.

Even though WQHD has more pixel density, the overall quality will look the same when using the WQHD resolution on a standard screen. Whether you go for a large screen or regular, you won’t find any apparent difference on the screen. However, if you don’t want a widescreen and won’t mind stretching the screen for a wide aspect ratio, QHD resolution serves as the ideal deal.

Moreover, you will have more choices with QHD than WQHD as they are pretty limited in number. So we think extra pixel count will matter only if you want to get the widescreen experience and will use a screen size above 30 inches.

Benefits and Drawbacks of WQHD and QHD Resolution

Like every other resolution for projector, both WQHD and QHD resolution have their own set of benefits and drawbacks. Let’s check them as it will help you to decide between the two;

Question: What is the main difference between QHD and WQHD?

Answer: The main difference between WQHD and QHD resolution is the extra 880 pixels that WQHD resolution has. Moreover, WQHD won’t stretch the image like QHD and create a clear view of the WQHD.

Answer: PPI refers to the number of pixels present in an inch area of a digital image. A higher number of PPI doesn’t mean you will have a better resolution, but it indeed ensures a better detailing, image quality, and dimension. However, a marginal PPI difference doesn’t make much difference.

Question: Which resolution is ideal for gaming?

Answer: It entirely depends upon the screen you are using. QHD serves as a good deal for playing high-quality games, but if you are going for widescreen, then WQHD serves as the best choice.

Question: Are WQHD and QHD better than 4K?

Both QHD and WQHD serve as excellent choices for gaming and entertainment, and they have minimal differences between them. Both offer the same image quality and attributes, and the only difference is that WQHD has 880 more pixels for widescreen views.

Hello, I’m Mr.  James Hanson and I have been associated with projector industry for decades. From tender age, I had a huge knack towards projection hardware so gradually I was drawn into the industry. After I have left my college, I have worked with many projector manufacturers so I’m using that experience to create guide in this site. I have always kept myself with current tech and change in this segment.